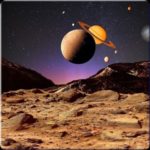 Enjoy interesting list of Astronomy facts about Space sorted by topics for listening.
Also you can run two astronomy quizzes for each topic.

Astronomy offline app include next themes:
Topic 1. The Sun – The sun is just one of about 100 billion stars in our galaxy. The average radius of the Sun is 695508 kilometers.
Topic 2. The Earth – Earth is the third planet from the Sun and is the largest of the terrestrial planets. Formed approximately 4.54 billion years ago.
Topic 3. The Moon – At a distance of 384400 kilometers from the Earth, the Moon is our closest and only natural satellite.
Topic 4. Asteroids – An asteroid is a small body orbiting the Sun that is composed primarily of rock or metal.
Topic 5. Kuiper Belt – Is similar to the asteroid belt found between the orbits of Mars and Jupiter, but it is 20 times as wide and somewhere from 20 to 200 times more massive.
Topic 6. Comets – are usually made of frozen water and supercold methane, ammonia and carbon dioxide ices.
Topic 7. Meteors and meteoroids – A meteoroid is a small fracture of rock that enters our Solar System.
Topic 8. Stars – A star is a massive, bright, sphere of very hot gas called plasma which is held together by its own gravity.
Topic 9. Milky Way – The Milky Way is one of many galaxies that lie in the universe. This galaxy is a spiral or whirl shape and home to our planet and Sun.
Topic 10. Planets in solar system – Planets are among the many worlds and smaller objects that orbit the Sun.
Topic 11. Galaxies – A galaxy is a massive, gravitationally bound system that consists of stars, stellar objects, such as brown dwarfs and neutron stars, nebulae, an interstellar medium of gas and dust, black holes, and an unknown component of dark matter.
Topic 12. Dark Matter – Dark matter is something that an astronomer or scientist cannot observe through ordinary telescopes. It does not emit or absorb light, and is considered responsible for holding all the normal matter in the universe together.
Topic 13. The interstellar medium – Also ISM is the matter that exists in the space between the star systems in a galaxy. This matter includes gas in ionic, atomic, and molecular form, as well as dust and cosmic rays.
Topic 14. Orbits – In our solar system, the moon orbits around Earth. Earth and the other planets orbit around the Sun. The stars also orbit around the Sun.
Topic 15. Black holes – Black holes are among the strangest things in the universe. They are massive objects collections of mass with gravity so strong that nothing can escape, not even light.
Topic 16. Pulsars – is a highly magnetized, rotating neutron star or white dwarf, that emits a beam of electromagnetic radiation.
Topic 17. Novae and Supernovae – A nova, plural novae or novas is a cataclysmic nuclear explosion on a white dwarf. Supernova is nothing but a stellar explosion. To put in other words, it is actually an explosion of a star.
Topic 18. The Andromeda Galaxy – is the closest large galaxy to the Milky Way and is one of a few galaxies that can be seen unaided from the Earth. In approximately 4.5 billion years the Andromeda Galaxy and the Milky Way are expected to collide and the result will be a giant elliptical galaxy.
Topic 19. Kepler’s laws of planetary motion and interesting facts about Kepler – In astronomy, Kepler’s laws of planetary motion are three scientific laws describing the motion of planets around the Sun.
Topic 20. Mars Facts – Mars is the fourth planet from the Sun and is the second smallest planet in the solar system. Named after the Roman god of war, Mars is also often described as the “Red Planet” due to its reddish appearance.